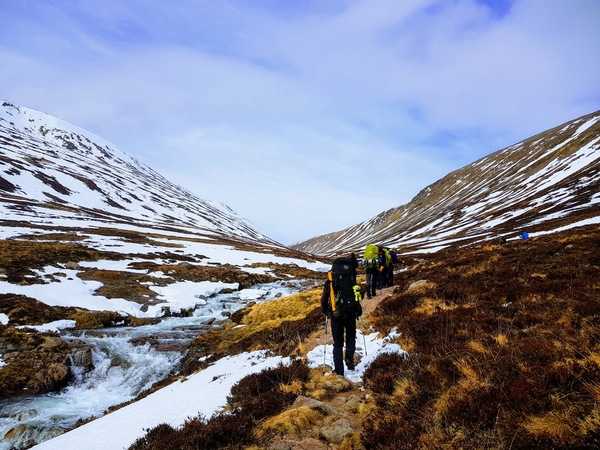 Winter in the Cairngorms - 3

The day was 'all hallow's eve' but as the sun came up over the forest around us there was not one ghoulish thought amongst us.
The inside of my tent had frozen overnight so I hung it up in the dazzling sunshine between two lovely old beach trees then made my way over to the stove which was boiling over, full of the promise of strong coffee.
As I sat on a fallen tree enjoying my morning cup I was pleased to see that the tent groups were moving around with a busy efficiency that usually takes a few days on the trail to acquire. There was a buzz in the air and no mistaking it, people were feeling strong and hungry for a bigger day... one must oblige.
The plan was to to follow the 'Luibeg burn' to the bridge on the South Western side of 'Carn Crom' then continue west and eventually North into the famous 'Lairig Ghru' a massive valley etched and carved by glaciers leaving a superb classic U-shape and almost vertical slabs of scoured rock standing hundreds of meters high.
We camped on the western side of the Dee river at the base of the Devils point, (everyone enjoyed the story of its original and fairly anatomical name).
Now it was still early so first things first we put up the tents and of course brewed another coffee.
It was decided in the afternoon that we would split the group into two teams, one would go high and aim to summit the 'Devils Point' and the others would head North up the valley and set eyes on the remote 'Garbh Choire' refuge, built by Aberdeen University Lairig Club in 1966.
For the summiteers it was like the heavens had opened just for them. As they ascended, the clouds rose higher and higher and when they eventually hit the plateau a fantastic panorama was theirs to behold, a real treat.
The Lower group walked far up the valley working on navigation techniques, like pacing, timing and map reading. We eventually reached the valley with the refuge and took a bearing on it but struggled to see it clearly because there was a lot of snow making it blend in with the terrain around it. Happy that we had made it this far the group turned back so as to reach the tents before the onset of darkness. Unknown to the rest of the party I had taken along my trusty pig head mask to scare them on halloween (it had taken a herculean effort from myself not to have used it on the nights preceding it but somehow i'd managed) I took great delight at producing this just as it was getting dark to great effect. However the icing on the halloween cake was when we returned we met some other hikers, two of which were from the Netherlands and two from England. It turned out that one of the lads from England played lord Voldemort's body double in the Harry potter movies. So we ended up sharing a dram with Lord Voldemort on All hallow's eve... You couldn't make it up.